Book-bound and Back to Blogging…

Some of you may remember me as the guy who used to send out first weekly, and then monthly blogs informing you of good books I had read, fun bookshops I had discovered, or authors I had recently been stalking.

And then I decided to write a book, and it turned out that took up quite a lot of my time. 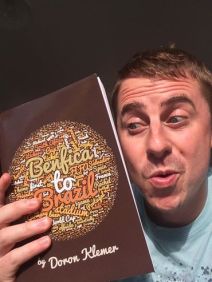 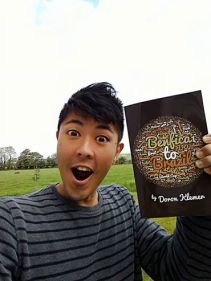 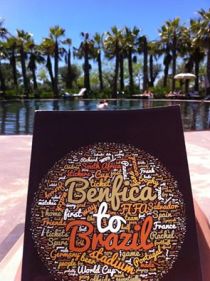 Well, that book is not only finished, but published, printed, and available for you to buy, in both real life old-fashioned paper format, or on various eReaders for your more modern cybertechno whizzkids.

You can enlarge your knowledge, happiness, and bookshelf by picking up a copy at Amazon (US), Amazon (UK), Amazon (of your choice), The Book Depository, Barnes & Noble, and even in the Kindle store.

If you happen to be in the US, (where I now find myself), we can cut out the middle-man and I can get a signed copy to you if you get in touch through the COMMENTS section below.

How can you resist? It is currently the 102nd ranked book in Amazon’s general travel guides to Brazil!

As someone who has been sharing the contents of his brain in written form for much of the past two decades, it’s fun to have an actual book out there in the world. I hope some of you will purchase a copy and enjoy the tales of my travels and adventures following sporting events and warm weather across the globe, learning languages and finding some bizarre and rewarding jobs.

About a third of it is about football/soccer, but if you’re not a fan don’t let that put you off, the rest of it makes up for the sports content with trivia about everything from Portuguese history to Brazilian sexuality, and lots of ruminating on the fascinating topic of the differences between languages.

With that out the way, I am excited to return to (semi)-regular bookblog output: I have around 18months’ worth of Books Bought & Read lists to update you on, and since I have recently moved to the glorious, unknown pastures of Brooklyn, New York, I shall be bringing you news of literary goings ons here, including a guide to my favourite bookshops in the NY area.

It’s good to be back!

I have been neglecting you like I have never neglected you before. I haven’t written you a monthly update since March: you could have had a baby blog in that amount of time! 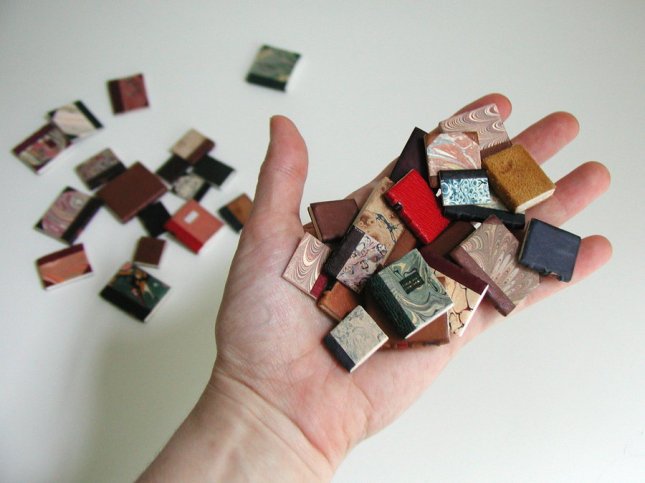 The truth is…I’ve been seeing someone else. It’s not another blog this time. It’s more serious than that. I was involved with…a book.

Don’t cry. You don’t need to feel inadequate. We have fun together, but a book…well, that’s something serious.

But we’re through. That’s my big news. Me and the book, we finished in the first few days of this new year. There are one or two loose ends to tie off, but pretty soon I’m going to have a lot more time for you and, if you’ll have me, I’d like to come back to you.

Even with all our problems, we had a pretty good year, right?

Even with me neglecting you, over 4,000 people came by to see us in 2015, (although I suspect some of them may only have been visiting to see our mutual friends, David Foster Wallace and Miranda July).

And we’re a pretty international pair: those friends came from 95 different countries! (Mainly in the US, the UK, and Portugal). 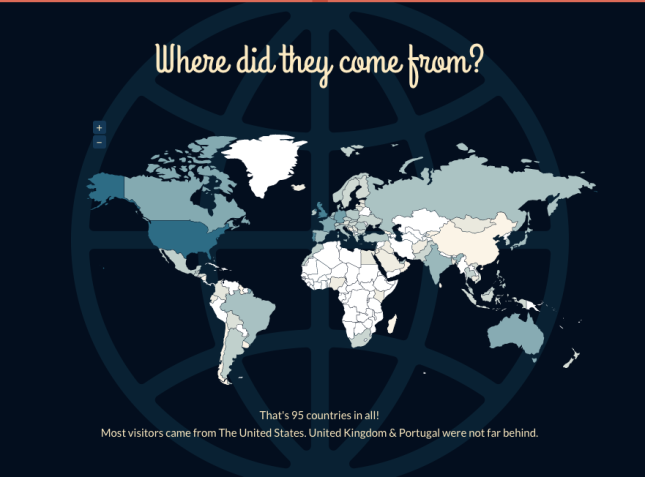 Posted by doronklemer on January 12, 2016 in BOOKS

It has been far too long since I wrote, and checking exactly how long, I find that my monthly Books Bought & Read section appears to be over 6 months out of date. That will all change in the coming months, when I: a) have my book finished and can get back to blogging and b) move to New York for the winter with little to do but make soup, and write.

Before that, though, I have just returned from an overnight visit to the glorious, medieval walled village of Óbidos an hour (exactly, by bus) north of Lisbon, and I wanted to tell you about the things I found there: fantastic accommodation, great music, and one of my modern literary heroes.

I took two days off work as my favourite living Portuguese writer was attending, and it just so happened that a great Mozambican author and the singer of 2014’s Portuguese album of the year were both going to be present on the same day, so I had little choice in the matter. Finding a room free at the best B&B in the entire region, however, was pure luck. Hosts Sharon and John have the cosiest house right by the train tracks complete with patio, swimming pool, the craziest life stories, and the greatest tea-drawer I have ever seen.

But I wasn’t in town for tea: I was there to attend the first Folio Literature Festival of Óbidos, and to meet Gonçalo M.Tavares. I had bought a ticket to see him in discussion with someone I had never heard of, not expecting to understand much of anything but simply hoping to meet him afterwards and get one of my books signed: in the end I sat through three sessions with him, and understood more than I’d expected to.

First, a packed standing-room-only 60-minute lesson he offered for free in the village hall based (extremely loosely) on Saramago’s ‘Blindness‘; then the talk, on his work in general; and finally a book launch for his latest work, the wonderfully titled ‘The Torcicologologista, Your Excellency.’

Here are the highlights I took from each:

-There are so many billions of images today, we are always anxious, whatever we see, knowing how many more we are missing.

-There is a character in certain Japanese theatre pieces called ‘The Absent,’ who represents someone/something not there, but stands stage front and centre…and is the best paid of all, for being able to make the audience not see what is right in front of them.

-The talk focussed little on literature, instead showing Tavares‘ impressive breadth of interests: everything from John Cage’s infamous 4min 33seconds (of silence); a video of a man pushing a block of ice through the streets until it disappeared; and the fact that an image can become so commonplace as to be invisible, but there is always a new way to see it, exemplified by this stunning scene from master Russian film-maker Andrei Tarkovsky:

-Words have weight, and different weights for different people. The word ‘Lisbon’ will mean different things depending on a person’s experience of the city.

-‘Fuga,’ or ‘escape,’ has been a common thread in literature since the Greeks: we are all fleeing something, as are most of the characters in his works.

-If we were immortal, we could watch films until we saw a good one. Mortality means that time and choices weigh heavily on us, (similar to the earlier-mentioned feeling of the anxiety of missing out on all of the images around us)

-When you die, it is not the facts, not: ‘What did you do?” which will be important, but: “How much happiness did you put into, and take out of, the world?”

–Gonçalo’s definition of the pleasure to be derived from something as insignificant as playing football: “To do something ‘inútil‘ (useless) and to take pleasure in it is to undertake a revolutionary act”!

–Gonçalo’s books are all different, but with this newest one the humour is front and centre: humour is an integral part of playing with language, something which he clearly loves to do. 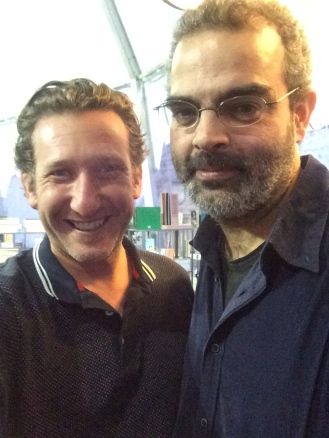 As you can see, I got to meet the man himself, and am well on my way to completing my collection of his complete works, two of them now signed and ready to be encased in glass if and when, as the great Saramago himself predicted, Mr.Tavares joins him as the second ever Portuguese Nobel Laureate in literature.

I later got to meet Mia Couto, a wonderful Mozambican author whose books I have been reading here and there, and who took the time to confirm for me a rumour I’d heard and which may be my new favourite anecdote on my tours: Mia was once invited to talk at a literary conference for black African women…despite only being African, and in no way either black or a woman! 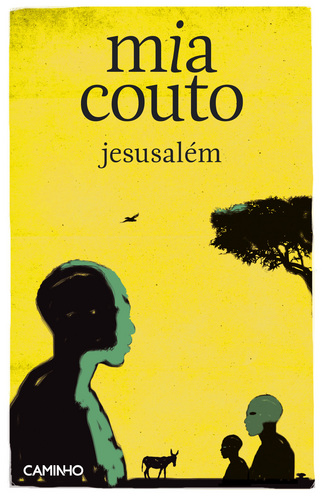 As if all that wasn’t enough, the evening was rounded off with a fado performance from Gisela João, one of the hottest modern performers of this most traditional of Portuguese musical styles.

I leave you with one of the songs she played to end the evening, and wish you sweet Portuguese dreams.

Posted by doronklemer on October 24, 2015 in BOOKS