87. Some quotes and things…

23 Oct
Since I am currently travelling around Israel with my family, I once more present to you this week a selection of ideas jotted down from the many and varied books ingested over the past year or so. Preserving turns of phrase and thought-provoking comments was one of the main reasons I started this blog after all. Enjoy!
.

‘The Terrible Privacy Of Maxwell Sim,’ Jonathan Coe
Coe, one of my favourite contemporary English writers, is the flipside of another of my favourites, Ian McEwan, reporting on everyday English life with all its awkwardness and inadequacies, but focusing on the comic side rather than the tragic.

“I remember asking her for some pointers about books I should read: books that might potentially change my life. She told me to try some contemporary Americanfiction. ‘Like what?’ I asked. ‘Try getting one of the Rabbit books,’ she told me, and a few hours later, when I came back from the bookshop and showed her what I’d bought, she said, ‘Is this meant to be some sort of joke?’ It was Watership Down‘…”

.
‘The Spirit Level: why equality is better for everyone,’ Richard Wilkinson & Kate Pickett
.
This was an interesting, left-leaning book of the scientific kind which I love so much, explaining why the out-of-control widening wealth gap is bad for societies.
.
A quote at the header of Chapter 5 on Mental Health and Drug Use caught my eye, and my imagination:
.

.
On a monkey-based psychological study which I had somehow never heard of:
.

“Monkeys that had become dominant had more dopamine activity in their brains than they had exhibited before becoming dominant, while monkeys that became subordinate when housed in groups showed no changes in their brain chemistry. 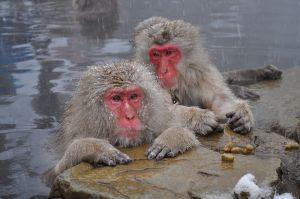 “In a striking experiment, researchers have also shown that people with friends are less likely to catch a cold when given the same measured exposure to the cold virus – in fact the more friends they had, the more resistant they were. Experiments have also shown that physical wounds heal faster if people have good relationships with their intimate partners…”
.

Finally, the best (presumably ironic) criticism of our material world I have heard in a while:
.

.
‘Dr.Tatiana’s Sex Advice To All Creation: the definitive guide ot he evolutionary biology of sex,’ Olivia Judson
.
One of the cleverest books I have read for a while: an explanation of Darwinian theory and animal/insect peculiarities told through an Agony Aunt column for those critters! A sample question:
.

“Dear Dr.Tatiana,
.
I’m a queen bee, and I’m worried. All my lovers leave their genitals inside me and then drop dead. Is this normal?
.
Perplexed in Cloverhill”

.
And a selection of the fascinating, informative replies:

.
“After a lengthy lovemaking session, the giant octopus, for example, hands over a spermatophore that is a huge bomb. Over a meter (three feet) long, it contains more than ten billion sperm and explodes inside the female reproductive tract…”

“…young male iguanas…ready to go, desperate to use one or the other of his penises (yes, like many reptiles, he has two, a left and a right penis)…” 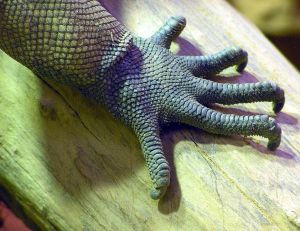 “Unlike the Japanese cardinal fish, a species where males brood fry in their mouths, the Darwin frog doesn’t eat his children if he sees a girl sexier than his original mate…”

.
(meaning, presumably, that this is something which the Japanese cardinal fish does do!)
.
Finally, on a theory which suggests that nature re-balances itself when there is a shortage of either males or females:
.

“…a significantly larger proportion of boys were born in the immediate aftermath of each world war than before the outbreak of hostilities. (I should stress the mechanism for this is unknown and the finding may be a coincidence rather than a demonstration of Fisher’s principle in action. But it is provocative nonetheless)…”

.
If only biology classes at school had been this much fun!
.

.‘Invisible Cities,’ Italo Calvino
.
A strange, theoretical book of sketches of imaginary, often impossible places. Some parts were a struggle, but there was some beautiful use of language and imagination:
.

“Paris, where millions of men come home each day grasping a wand of bread…” 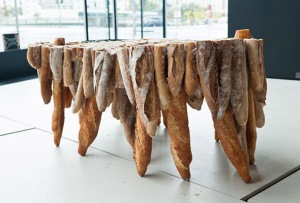 .
The only way to really summarise this collection of mini-sketches, Borgesian in their absurdity and willingness to propose an idea without having to logically follow it through, (see Argia above), but full of subtle, twisted humour, is to reproduce one of the short descriptions in its entirety:
.

“Thin Cities 4
.
The city of Sophronia is made up of two half cities. In one there is the great roller-coaster with its steep humps, the carousel with its chain spokes, the Ferris wheel of spinning cages, the death-ride with crouching motor-cyclists, the big top with the clump of trapezes hanging in the middle. The other half-city is of stone and marble and cement, with the bank, the factories, the palaces, the slaughterhouse, the school, and all the rest. One of the half-cities is permanent, the other is temporary, and when the period of its sojourn is over, they uproot it, dismantle it, and take it off, transplanting it to the vacant lots of another half-city.
.
And so every year the day comes when the workmen remove the marble pediments, lower the stone walls, the cement pylons, take down the Ministry, the monument, the docks, the petroleum refinery, the hospital, load them onto trailers, to follow from stand to stand their annual itinerary. Here remains the half-Sophronia of the shooting-galleries and the carousels, the shout suspended from the cart of the headlong roller-coaster, and it begins to count the months, and days it must wait before the caravan returns and a complete life can begin again…”

.
Civic life and government as a travelling circus: what a beautiful idea…
.

.
“Payback: debt and the shadow side of wealth,’ Margaret Atwood
.
A gorgeous, slim volume of a series of Atwood‘s speeches on the nature of debt and money.
.
On a theme I had read in two or three different books in the weeks before this treatise on the moral, mythic and religious background of money and debt, most recently in the aforequoted Jonathan Coe‘s ‘The Terrible Privacy Of Maxwell Sim‘:
.

“Children start saying, ‘That’s not fair!’ at the age of four or so, long before they’re interested in sophisticated investment vehicles or have any sense of the value of coins and bills. They are also filled with satisfaction when the villain in a bedtime story gets an unambiguous comeuppance, and made uneasy when such retribution doesn’t happen. Forgiveness and mercy, like olives and anchovies, seem to be acquired later…”
.

(Although neither of those by me. The olives and anchovies, I mean.)
.
Finally, on the nineteenth-century novel, a topic covered thoroughly a few weeks later when I read Jeffrey Eugenides‘ ‘The Marriage Plot‘:

“When I was young and simple, I thought the nineteenth-century novel was driven by love; but now, in my more complicated riper years, I see that it’s also driven by money, which indeed holds a more central place in it than love does, no matter how much the virtues of love may be waved idealistically aloft…The best nineteenth-century revenge is not seeing your enemy’s red blood all over the floor but seeing the red ink all over his balance sheet…”
.

.
‘Speak, Memory,’ Vladimir Nabakov
.
Not at all my favourite by one of my all-time favourite authors, but enough meat to warrant a few mentions here.
.
On a topic which fascinates me, the arbitrary division of time and dates: Nabakov was born in a Russia which had not yet adapted to the modern Gregorian calendar from the old Julian one, and thus:
.

“By the Old Style I was born on 10 April, at daybreak, in the last year of the last century, and that was (if I could have been whisked across the border at once) 22 April in, say, Germany…”
.

On Nabakov’s synesthesia, in which each letter of the alphabet represented a different colour to him:
.

“The word for rainbow, a primary, but decidedly muddy, rainbow, is in my private language the hardly pronounceable: kzspygv…”
. 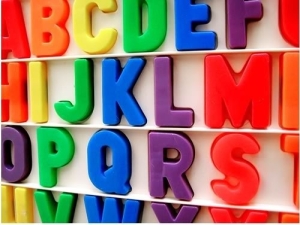 Photo from The Neurocritic

On the bizarreries of some countries’ familial systems:
.

“I had two brothers, Sergey and Kirill. Kirill, the youngest child (1911-64), was also my godson as happened in Russian families…”
.

WHAT?!
.
On the comparative status of footballing goalkeepers in different nations:
.

“In Russia and the Latin countries, that gallant art had been always surrounded with a halo of singular glamour. Aloof, solitary, impassive, the crack goalie is followed in the streets by entrance small boys. He view with the matador and the flying ace as an object of thrilled adulation…He is the lone eagle, the man of mystery, the last defender…
.
But in England, at least in the England of my youth, the national dread of showing off and a too grim preoccupation with solid teamwork are not conducive to the development of the goalie’s eccentric art…”
.

Ah, how I love it when erudite, intelligent people discuss football! Albert Camus, author of ‘L’Étranger‘ and one of the heroes of the French Existentialist movement, was international goalkeeper for Algeria, after all, and there is a wonderful section in a Martin Amis essay which discusses Salman Rushdie‘s rather surprising ball skills.
. 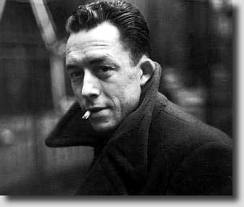 .
Finally, a quote which perhaps reveals more about Nabkov’s fiction than anything I have ever read: literature as a challenge, a puzzle, a way to bamboozle and test the reader, and an obsession with chess, echoed in director Stanley Kubrick:
.

“It should be understood that competition in chess problems is not really between White and Black but between the composer and the hypothetical solver (just as in a first-rate work of fiction the real clash is not between the characters but between the author and the world)…”
.

“There’s a saying here, perhaps you know it: ‘official decisions have the shyness of young girls’…”
.

As I experienced with David Foster Wallace’s ‘Infinite Jest,‘ I once again suffered the frustration of the unfinished novel, this time ending in the most abrupt, unsatisfying of manners:
.

“She held a trembling hand out to K. and made him sit down beside her, she spoke with an effort, it was an effort to understand her, but what she said      “
.

.
‘Bob Servant: hero of dundee,’ Neil Forsyth
.
I have recently blogged on the genius first book of this genius spam-annoyer: in this slightly more parochial ‘autobiography’ of Bob Servant there were flashes of hilarity, including wonderful, almost Nabakovian, use of footnotes to undermine the main text:
.

“It used to break my heart when Tonto would look over at The Lone Ranger, swish his tail and call him Kemo Sabe. *
. 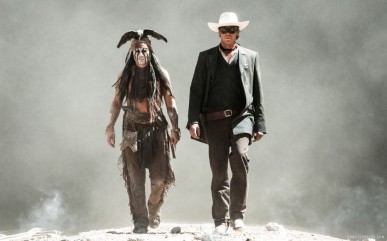 The Lone Ranger and the (real) Tonto, photo by Spinning Platters

“I remember when my Dad died I said to my Mum that it was just me and her against the world. She agreed that things weren’t looking good for me but pointed out that it was a bit unfair to drag her down with me…”
.
“In 1969 The Great Skirt Hunt came to an end when I got myself a girlfriend. Her name was Daphne but she should have been called Catastrophe and not because that sounds a bit like Daphne but because that’s what she was. She was a girl-next-door type. If you happen to live next door to a fucking idiot…”
.

“All in all, not a man of passion. He is not sure he has ever liked passion, or approved of it. Passion: foreign territory; a comical but unavoidable affliction like mumps, that one hopes to undergo while still young, in one of its milder, less ruinous varieties, so as not to catch it more seriously later on…”
.

Posted by doronklemer on October 23, 2013 in BOOKS

One response to “87. Some quotes and things…”